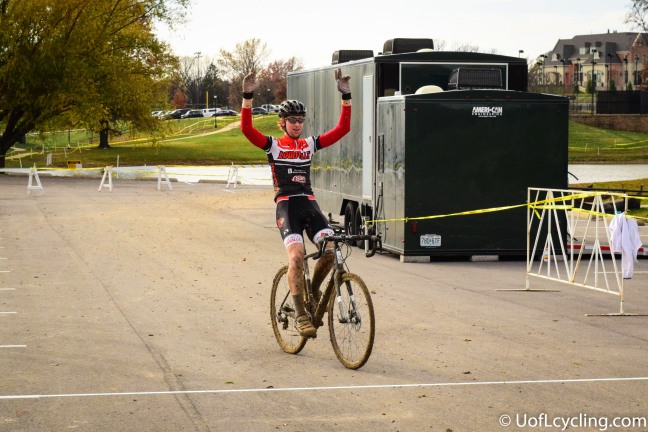 Francisco dominated the field en route to his first MWCCC victory, leading the group out of the start line into the first turn of the course. “I got a good start, stayed up front, and kept it clean,” he said coolly after beating second-placed teammate Ben King by almost four minutes. King’s race was an entirely different story caused by a mechanical issue on the first lap, dropping him from second place to sixth. “I just concentrated on picking people off one by one,” said King who battled most of the final two laps with Lane Johnson of Lindenwood University for second place, eventually edging the burgeoning rider by a mere three seconds.

Francisco and King qualified for Collegiate Cyclocross Nationals in Asheville, N.C., on January 8, 2016. Both riders kept their predictions conservative, especially Francisco who earned the MWCCC front-row start spot—a call-up reserved for the best riders in each conference throughout the country. “I’m going to try to not get passed by too many people because I’m at the front,” he joked.

In the lower-ranked Men’s B event that competed earlier in the day, Rikus Van Zyl rode to 3rd place on the mostly frozen course. Abner Miralda held his own for fourth, while Jacob Holtgrewe pushed past the rest of the field into fifth.

In the Women’s B/C race, Kelsey Voit finished her first-ever race season with in second place behind Washington University-St. Louis rider Juhi Shah.

The creative course wound through the scenic campus of Lindenwood University, taking advantage of several steep grass hills, a tricky single-track section, and a lap around the lake at the heart of the Presbyterian institution. Rainy weather from the day before and freezing temperatures overnight created thrilling racing on Sunday, forcing riders to tread on thawing mud, perfect for Cyclocross. “[The course] was really well balanced, there were a lot of power sections and a lot of handling sections,” said Francisco, expressing his approval.

UofL Cycling has been selected to host the 2016 MWCCC Cyclocross championships in November 2016.

UofL Cycling was founded in 2013 as part of the Student Cycling Coalition, a 501c (3) student-operated organization at the University of Louisville. It is a sister program of UofL Triathlon.

This site uses Akismet to reduce spam. Learn how your comment data is processed.

Don’t see what you’re looking for?

UofL Cycling and Triathlon are the racing teams operated by the Student Cycling Coalition, a non-profit student group at the University of Louisville in Louisville, Ky.